In this article, I will take a closer look at the benefits and limitations of moisturisers. I pick out this product group as representative of various “cosmeceuticals” that are applied to the skin as creams, lotions, masks or the like and are supposed to unfold their effect by penetrating the skin. All products claim that they are good for dry skin. And some claim much more. And rightly so?

In my opinion, skin creams should be used to keep the skin moisturised and to prevent dry skin. Skin creams that work very well against dry skin are already available for surprisingly little money. This requires neither a magic formula nor any “revolutionary” new active ingredients. A good moisturiser from the drug store or pharmacy is usually enough to maintain good skin hydration, even for dry skin.

Anything more than that, beautifully packaged in fancy glass and glossy cardboard, is usually too much of a good thing. Futuristic-sounding active ingredients, new and revolutionary, are supposed to give the impression that the “serum” for 70 euros and above can do more than the classic moisturizer. From improving the skin’s appearance to the formation of new collagen tissue and the elimination of wrinkles. “Anti-ageing” is a buzzword that almost no cream can do without these days.

But in most cases, these are empty promises.  It is true that one or the other cream will certainly succeed in superficially concealing fine lines and visually improving a coarse skin texture due to its swelling effect. And there are certainly a number of soothing active ingredient complexes that promise relief from various skin irritations. But any claim of a “rejuvenating” effect I put a big question mark over. Even when active ingredients are used that are promising in themselves (such as hyaluronic acid). The superficial application sets narrow limits even for the best active ingredient. I will explain why in the following.

Little to be achieved at the surface

The main reason for my doubt is the superficial effect that creams, lotions and similar moisturizing products have in common. It only extends to the top layer of the skin, the so-called epidermis. And even there, the vast majority of creams only reach the uppermost cell rows of the so-called “stratum corneum”. The problem with this is that the cells in this layer can hardly be “rejuvenated” because most of them are dead. Even the most sophisticated active ingredient will only achieve marginal effects here. To be more effective, it must penetrate deeper skin layers. Into the deepest layers of the epidermis or, even better, into the dermis, where the blood vessels run and the metabolic processes central to ageing take place.

But this is not so easy for creams, lotions, serums, and the like. That’s why, in my practice in Munich, I rely on techniques such as microneedling, with which active ingredients can be introduced into the deep layers of the dermis through micro-channels pierced into the skin. Microneedling is an ideal procedure to stimulate collagen synthesis in the dermis and support it with specifically administered anti-ageing active ingredients. But as you can already see at this point, to be able to assess the effectiveness of moisturizer products, a certain knowledge of the structure of human skin is a prerequisite. Especially concerning the outermost layer, the epidermis.

Therefore, I will start my further considerations with a brief introduction to the “layer model” of human skin. In addition, I will go into some elementary dermal metabolic processes that are important for the constant regeneration of the skin and its adequate moisturisation. Why dry skin develops in the first place and what you can do about it will then become immediately clear.

The human skin is basically made up of three layers (from the outside to the inside): 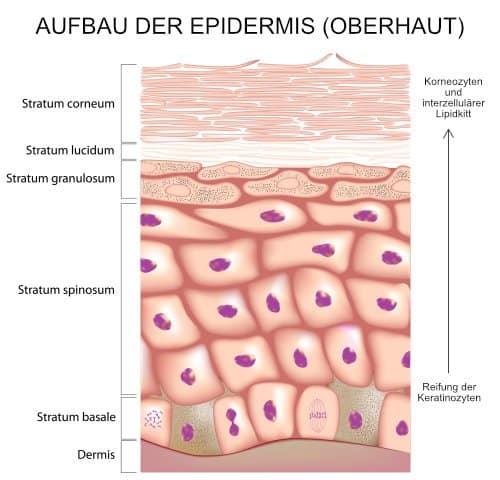 Between the basal layer and the stratum corneum, the epidermis has two further cell layers:

What does this mean for our moisturiser? Skin creams and all types of cosmetics that work through the skin must first pass through this outermost protective layer of the human skin, the stratum corneum. This is not particularly thick, only 5–10 micrometres only, and has only 10-20 individual cell layers. Nevertheless, this layer turns out to be quite an effective barrier. Whether active substances can successfully penetrate the skin therefore depends, among other things, on their molecular size, the so-called “molecular weight”. It is measured in “Dalton”. As a rule of thumb, active ingredient molecules may only be a maximum of 500 Dalton in size to penetrate deeper through the skin barrier into the epidermis. However, the molecules of the active ingredients that are important for skin hydration and anti-ageing are many times larger.

Hyaluronic acid, for example, occurs in different molecular weights from around 1 million Dalton, more complex variants go up to several million Dalton. When cosmetics manufacturers advertise with significantly lower molecular weights of 1000 Dalton and below, it is because they do not use hyaluronic acid itself, but a derivative. For comparison: BOTOX is around 900,000 Dalton. This is also far above any possibility of penetrating deeper into the skin. A “BOTOX cream”, that sometimes flashes through Social Media, will therefore remain wishful thinking for the foreseeable future.

WHY IS “FROM THE INSIDE OUT” equally IMPORTANT?

The barrier function of the stratum corneum from the inside to the outside is particularly important for maintaining sufficient skin moisture. The regulation of the cutaneous water balance is a central task of the barrier. The stratum corneum forms a kind of natural “vapour barrier” that prevents the human body from evaporating water too quickly through the skin surface and drying out as a result. In principle, the stratum corneum can be thought of as a thin film that lies on the skin and is almost impermeable to water and water-soluble substances. Its inner structure resembles a brick wall, in which large and thick corneocytes (they are actually the thickest cells in the human body) are stacked in rows on top of each other and firmly bonded with a “mortar” of epidermal lipids.

Various metabolic processes take place in the stratum corneum, the end products of which take on different tasks in the “protective wall”, partly of a chemical nature and primarily directed against external influences (bacteria, fungi), partly of a hydrophilic nature to regulate the moisture balance.

Furthermore, a loss of epidermal lipids leads to skin dryness. Certain cholesterol-lowering drugs, for example, are known to affect the lipid content of the epidermis as a side effect. In addition, frequent cleansing with soaps or the incorrect use of liquid oils (olive oil) in skin care also lead to washout of skin lipids and thus to a disruption of the barrier function of the stratum corneum. And thus to dry skin and all its consequences, dermatological as well as visual.

The healthy stratum corneum has a moisture content of about 10-20%. If the moisture content falls below this level, the skin appears dry and flaky. If, on the other hand, the water content is far above 20%, swelling occurs and the skin looks like it has been in the bathtub for too long. This swelling (“maceration”) reduces the barrier function of the horny layer. The gaps between the bricks in our brick-and-mortar model widen. This is an effect that many cosmetics make use of to be able to introduce active ingredients through the outer barrier into somewhat deeper skin layers. Cosmetically induced swelling is called “occlusion” and cream ingredients that can do this are called “occlusives”.

I will not dwell on the dermis for long in this text. This may come as a surprise, as the dermis contains the collagen and elastin fibres that are so important for a youthful appearance of the skin and whose slowed regeneration is decisive for skin ageing. This is one of the reasons why most of my other blog posts so far have revolved around processes in the dermis, such as microneedling or PRP. The dermis should also be the primary target of all the active ingredients touted by cosmetic companies as having rejuvenating effects. Collagen, elastin, various vitamin and amino acid complexes, hyaluronic acid, etc… all these substances act primarily in the dermis.

BUT: It is difficult for externally applied care products to penetrate the dermis. The epidermis turns out to be far too insurmountable for that. Most of the active ingredients that make it into the skin from creams or lotions get stuck in the upper rows of the “brick wall” of corneocytes and epidermal lipids. A standard phrase of mine, which you may have read on the blog or on Twitter, is: “Hyaluronic acid that is supposed to be beneficial has to come out of a syringe.” Because that’s the only way it gets into the dermis. Via minimally invasive techniques such as injections or microneedling.

So why use moisturizers at all?

How do I choose the ideal moisturizer?

From what has been said so far, there are already numerous indications for the choice of the individually suitable skin cream. In addition, it should be said that products with a low water content should be given preference, especially in the cold season. Creams with a high water content can lead to unattractive frostbite of the skin. Ointments (water in oil emulsions) are therefore more suitable when it is cold outside and a longer stay outdoors is planned.

For the normal season, it is best to choose products that suit your skin type (dry/oily). If you have oily skin or acne, you need a non-comedogenic product. However, you should also avoid creams with a high water content in all body regions that are at risk of maceration (armpits, intimate area, body folds). Due to the large number of cosmetic ingredients, you should also keep an eye on the risk of allergic reactions. And as already mentioned: If you have to choose between several creams, choose the one with the highest sun protection factor. This will turn your moisturizer into a real “anti-ageing” product.

Attractive at every age